To be happy or mourn

To be happy or mourn

There is already public, so take a Spanish Blog

At that time, Michael was the biggest pop star in the universe. Just out of the massive global success of Thriller, a tour with all sold, and earned multiple Grammys that had catapulted her into the rarefied air of Beatlesque pandemonium wherever he went. Within the music industry was seen as the most pure talent of a generation, and the combination of Michael and Quincy Jones in the study set a standard that may not become equal.

Leonard was a global superstar and a TV personality in his own right - is listed in many publications as the musician, conductor and composer of the twentieth century's most celebrated. Yet Leonard felt shocked by the talent of Michael, who once described me as "the most electrifying pop star who had seen since the Beatles." Michael Leonard wanted to introduce classical music and perhaps inspire you to a collaboration of classical and pop music.

I was determined to get the desire to Leonard organizing the meeting between my two friends. I called another friend, Quincy Jones, also a musical titan and a legend to that already introduced him to Leonard the day before another dinner.

Quincy idolized Leonard Bernstein, so Michael said he would call to ask. An hour later, Michael called and said he could not. When I told Leonard that Michael would not be, I said "What?" You told me, Leonard Bernstein invited him to come to my concert!? "I went to talk to Quincy. Two hours later, Quincy called for Michael would say. "But it has never been to a classical concert, it will be interesting!"

At the concert, enjoyed watching Michael Leonard, who at one point jumped about three feet for a portion of the room to land with a resounding blow. (Quincy, Michael, and I was sure that Leonard was showing off, trying to draw attention to Michael.)

That night, over dinner at my house, I noticed that Michael was a man of the best and sweetest I know. Agraceció me again and again by "inviting" the concert. He asked me to recall some of my successes with the group Ambrosia, so I sang the chorus of "Biggest Part of Me." His eyes lit up like a child, and began to sing the chorus to me.

At one point, Leonard began his long white scarf around the neck and and called MJ for a few snapshots, then stood up and taught Michael a practical class on how to conduct an orchestra. Then the two music giants began to talk about ... Acne! Both had problems with that, and somehow it was a personal matter that was the most embarrassing point of connection. Leonard recalled the story for the rest of his life. Michael called me the next day and asked me pictures of that night, was excited to have them.

During this special evening, I had the need to share my faith with him, for he knew that beside him there was another Christian artist. So when I whispered "How can I thank you so wonderful tonight?" I said, "Michael, I have not done this, has been God!" He said, "Oh yeah, I think at heart."

I told him I was Christian and he also said. We talked about the first Christmas-themed children we heard saying: "Jesus loves me, this I know, for the Bible tells me so. Little ones to him belong, they are weak but he is strong. "With all the noise of the party around us, both we bow quietly and sing the song as children in a choir. "Yes, Jesus loves me. Yes, Jesus loves me. "Then we got a little hug.

I knew at that moment that this sweet genius would find a peaceful place in the eternal sky. I do not find rare Michael, nor mad, nor anything that is said. I mean I knew that all the accusations they made were false and that, I think I was incapable of doing anything but love kids and let them know you do what they need to help them. Look at the wonderful work he did write and co-producing "We Are The World," and the 39 children's charities he supported with his generosity. That was Michael. I think during his trials endured suffering like Christ and prayed for the intervention because he was being charged for what I wanted most, children. This caused him pain perhaps more than anything in life.

Michael was loved Jesus with all his heart. Quincy told me that MJ worked to share their faith with others, sometimes door to door because you were raised as Jehovah's Witness. Later in his life telling people that he was a non-denominational Christian. More recently, it was said that he had converted to Islam. But I knew Michael had seriously considered giving up music and devote himself to Christian ministry.

If there is anything that gives me peace in this time of loss, is knowing that one of the greatest artists of all time is now doing the moonwalk in the golden heavenly paths, where the streets have no name, with a broad smile on face, and a band of angels welcome you home.

Michael, my friend, rest in peace in heaven. 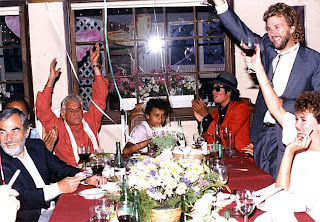 Remember not everyone can be in on the hoax or it'd get too messy. This guy probably has no doubt he is really gone

dexember wrote:Remember not everyone can be in on the hoax or it'd get too messy. This guy probably has no doubt he is really gone

yup...and someone gotta believe that he is 'd'...or otherwise his plans will never worked..

the guy maybe buying that story..or it could go either way..who knows

What really makes me sad is injustice, I endure everything, all the charges, indeed some people do not deserve to be called "human"