Not a hoax pic thread, but one I didn't wanna bring up... questions.. help :(

Not a hoax pic thread, but one I didn't wanna bring up... questions.. help :(

Okay.... we all love our Michael... and we know about the lupus diagnostic, and of course his skin disease... I really do hate to bring this up, but I would like this answered, and I mean no offense..

I read somewhere that lupus doesn't cause the result of his hands in the last few years... almost like they are deteriorating...

And I am sure old age wouldn't do this much... do you know exactly why it was so severe, or was is honestly just from you know.. lupus?.. 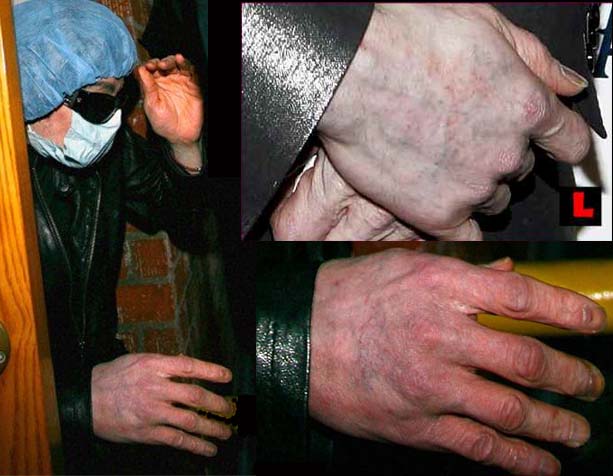 And... from the website (I don't support it, because they made a reference to drugs, which I disapprove of, and I just happened to find this)

Just a reference of proof, don't have to click.
http://www.handresearch.com/news/in-memoriam-hands-of-michael-jackson-hold-my-hand.htm#hand-deterioration


THIS was the little article:

Michael Jackson: his abnormal fingernails were not due to his vitiligo, nor lupus!

Michael Jackson was diagnosed in 1986 with vitiligo and lupus. Lupus is known as a potentially lethal disease (heart disease is a major complication in lupus!), but in Michael Jackson it was described to be in remission. Nevertheless, one can wonder: can his fingernail problems be related to the vitiligo and/or the lupus? The answer appears to be a ‘no’:

Vitiligo is related to the following nail disorders:

Lupus is related to the following nail disorders:

• Nail spooning;
• Irregular, twisted, and dilated vessels at the cuticle.

But one should not forget that Michael Jackson’s fingernail problems were first recognized by the media in 2006, when members of Michael Jackson’s family were terrified that his escalating dependence on prescription drugs had become a danger to his life.

While Michael Jackson’s lupus was considered to be in remission, one could also speculate that his hand deterioration + his sudden death might have signaled a lupus relapse … due to an excessive use of prescription drugs???

Well Michael does have a very sesitive skin do to the skin disorder he has vitiligo.
Sunlight would cause him serious damage, since he has no pigmentation and the hands are the on thing that is exposed to sunlight no matter how you try to protect them...

I appreciate your response.. sensitive to light... (of course....) Poor Michael..

I appreciate your response.. sensitive to light... (of course....) Poor Michael..

the reason his nails are darker is because vitiligo didn't affect that part of his hand....the rest is due to vitiligo....

As a person who has Lupus and Vitaligo also, I can tell you that the fingernail issues probably have nothing to do with the Vitaligo. However, they could very well have been Lupus related. One of the secondary diseases that quite often goes along with Lupus is Raynaud's syndrome. Raynaud's causes severe constriction of the blood vessels in the extremities, like fingers and toes, and sometimes further into the hands and feet. The slightest bit of cold, or even stress, will cause the blood vessels to constrict, causing severe pain and causing skin discoloration. The skin under the nails will turn a dark purple, or even close to black. Raynaud's will still occur even if the Lupus patient is in remission. The damage from the constant blood vessel constriction can eventually cause the extremities to lose all feeling. None of my finger tips have any feeling at all, and they are often discolored. (Try to get a knot out of your kids shoes with no feeling in your fingers!! It's also WAY too easy to burn yourself and not know it.) Basically, the tips of the fingers (or toes) and the nails, take a beating...from not having any blood, to nails changing shape, to being painful all of the time. It's not pretty, but it's far from being one of the most dangerous symptoms. I hope that helps.

Thanks for the info Kathy!

Bless his heart..I heard that Vitiligo can cause the skin on the hands to become very thin..This can be painful..This skin could crack and bleed easily too..Michael's hands look so sore..I love him so much..Just hate to think of him in any sort of pain.

@carelesslove46 wrote:Bless his heart..I heard that Vitiligo can cause the skin on the hands to become very thin..This can be painful..This skin could crack and bleed easily too..Michael's hands look so sore..I love him so much..Just hate to think of him in any sort of pain.

u girls notice that our baby wears this white stripes like bandage on some of his fingers since like...errr...ages ago ? i think it's to disguise the discoloration, like the glove did. so i agree with badloving, i think the nails / skin under his nails' discoloration is because vitiligo didn't affect that part of his hand