Well, another sleepless night, but I have watched the whole thing, downloaded it and analyzed it. Here is what I think:

Madonna speech:
I'm not a big fan of hers, but her speech hit the nail straight on
the head! She made him HUMAN and stated that he was human over and over
again. This is what he wants, people to see him like a human being with
feelings and needs.

Russel Brand:
He also repeated Mike being human, dispite what the media says about him. Go MTV!

The Tribute:
I think it rocked! The dancers were awesome and Janet was dancing
like a 20-year old. People can bash her if they have too, but go and do
it yourself! Not sure why she looked so mad at the end, maybe because
the audio was bad, maybe because she missed a step? Or was there
something else we couldn't see?
Nice and interesting add was the Thriller Worldpremiere, maybe just
because it was the biggest ever, maybe a sign for the new
Thriller-movie?

Lady Gaga's performance:
Great! Also typical she choose papparazzi. IMO that was a statement
about what they did to Mike: the dancer with the mask, the crutch and
the masked woman in the wheelchair could have been representing Mike.
Mike was killed by the media, that's the feeling I got she wanted to
make clear.

And finally, the trailer! http://www.thisisit-movie.com/:
Well, at first sight it all went by so fast, that it didn't look
strange to me, but I watched it 100 times and also frame by frame.
These are the textes spoken:

Someone:
There is Michael
The man is here
Kenny:
We're all here because of him
May that continue
With him leading the way
MJ:
This is the moment
This is it
It's an adventure
It's a great adventure (giggles)
You wanna take them places that you've never been before
You wanna show them talent that they've never seen before
Let´s do it 1 more time
I love you, I really do
We´re family, just know that
This is why I write these kind of songs
It gives some sense of awareness and awakening and hope to people
I feel so blessed that I can give the world back
It's all for love, L.O.V.E.
Someone:
Michael has a depth to him that people don´t really know
Guitarist:
This is a dream come true
When MJ comes in the room, his presence is just amazing

The man is here, followed by we're all her (Kenny) LOL
Why is that adventure so funny Mike

OK, the texts on the screen, also quite interesting:
His music reached billions
his dreams inspired the world
But there was still one dream
He wanted to share with everyone
In theaters everywhere
For 2 weeks only
Witness the never before seen rehearsal footage
The world has been waiting for
On October 28th
The Legend
The music
The event of a lifetime
Michael Jackson's This is it
In theathers worldwide October 28th
For 2 weeks only
Tickets go on sale September 27th

That dream he wanted to share was IMO a movie, he has done many many
concerts, but he wanted to make an innovating and surprising movie:
taking it to a higher level.

The songs we heard:
Smooth Criminal
Billie Jean
Jam
Bad
Wanna be startin'something
Don't stop till you get enough
Man in the mirror

The bold ones are not on the setlist we were presented. Neither is
We are the world (what they showed at the memorial), Earth song and
they don't care about us.
Ending with Man in the mirror with Mike saying I feel so blessed
that I can give the world back, was interesting IMO. How can you give
the world back with an (awesome by the look of it) concert?

The new Gold Pants:
The weirdest thing for me was Smooth Criminal, I'll explain why. We
have seen a picture of rehearsing Smooth Criminal already. In the
SC-jacket with the fedora, like always. But in this trailer we see SC
ALSO being rehearsed in a new outfit, the new gold pants. Why 2
outfits? What's with that?
Screens:

SC with the outfit we all know: 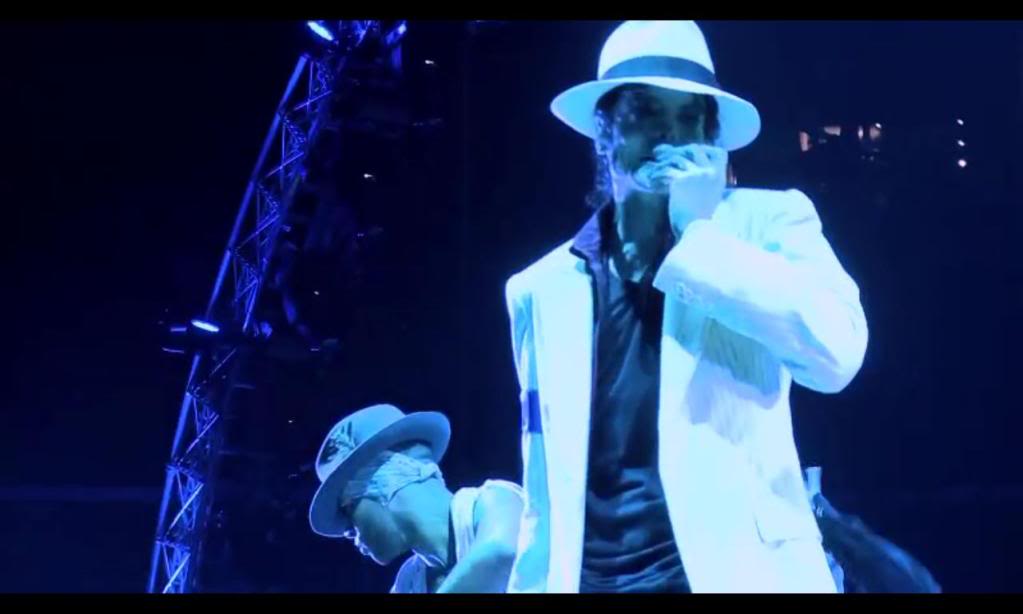 SC in the gold pants: 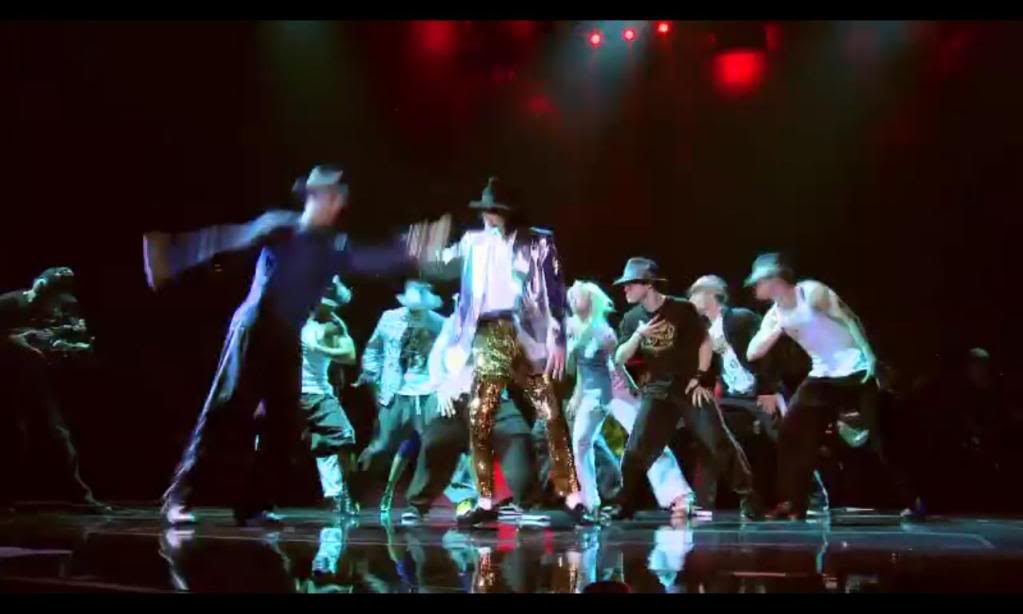 i really think that Janet was mad because of missing a step and maybe also because of the dancer who screw up the smooth criminal choreography while performing that leaning forward move..that was really funny, sorry LOL

OMG Ann, that STILL cracks me up!!!

I ROFL so much whenever I see that!!!

Rach wrote:OMG Ann, that STILL cracks me up!!!

I ROFL so much whenever I see that!!!

i KNOW this guy is ther looser of the world right now, hopefully MJ kicked his a** for that one LOL

Janet danced the hell out of that tribute perfomance & the angry stare scared me ... I think she was illustrating a point ... IDK ...

Russell Brand - he was on something though the whole performance .... (annoying but funny in some points).... Didn't pay attention much 2 him ...

Everything Else gave me a Huge Sign -- the special words ... the sayings ... the movie will give something out to us ... I have that feeling very strongly ....

I like the fact that you brought up the voice-overs. How convenient that they had such perfect things coming from Michael's mouth on tape to be used for the trailer. I wouldn't be surprised if MJ recorded those voice-overs AFTER June 25th lol

interesting bout lady ga ga i saw masked guy and it did reltae to mj do you think she was doing it as what they did to mj or are you saying shes in on hoax too? im confused with madonna? would she be in on it?xx