"Rumors of Paul McCartney's death began to circulate in 1969, a time when the strained relationships among the Beatles were becoming public knowledge. The story was that Paul McCartney had died in a car accident at 5:00 a.m. on Wednesday, November 9, 1966. Paul McCartney Dead: The Great Hoax suggested that Paul had picked up a female hitchhiker on his way to visit friends. The woman became so excited when she realized who had picked her up that she threw her arms around Paul and caused him to lose control of the car. Both Paul and his passenger were killed when the car swerved off the road and hit a stone fence. And here's where the story takes a turn toward the ludicrous—Paul was decapitated in the accident and the trauma to his head was so severe that even his dental records were useless in identifying the victim! Not wanting to lose potential record sales, record company executives suppressed the story of Paul's death and brought in a lookalike to replace him. For some reason (this is the part where you have to suspend disbelief) the surviving Beatles agreed to go along with this scheme, but they left clues on all of their subsequent albums about Paul's death and the imposter who took his place. Paul's stand-in was a man named William Campbell, who had won a Paul McCartney lookalike contest. With a little plastic surgery, William Campbell had taken Paul's place in photos of the group. The surgery had been successful except for a small scar above his lip. And, as luck would have it, William Campbell could also sing and just happened to be a songwriter with an exceptional ear for pop melodies. "

Basicly The Beatles pretended that Paul had passed away in a car accident and left "clues" in there songs to get more record sales and gain popularity. 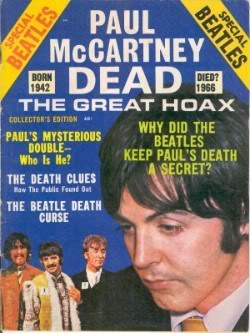 Now How does this relate to Michael Jackson you ask? Well it all fits together! Michael and Paul were great friends at one point, they recorded songs together and Michael even lived with Paul for a short amount of time. In the time they spent together Paul could of told Michael all about this Hoax Death plan, he could of told Michael about how much it made his record sales go up, how much money he made and how popular it made him. Unknowingly giving Michael ideas... 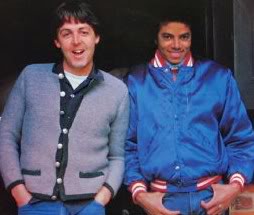 Now lets look at the lyrics of a song Michael and Paul recorded together shall we...

The Man
There's a man
Who plays the game of life so well
Ooh, there�s such a man
His thoughts you can never tell, ooh
And it�s just the way he
Thought it would be
�cause the day has come
For him to be free
I'm alive and I'm here forever


Waite just a darn minuet! "Im alive and Im here forever" where have I seen that before? It sounds soo farmilliar...OHYEAH! Thats right, it was on the wall in big letters at Michael Jacksons Memorial! 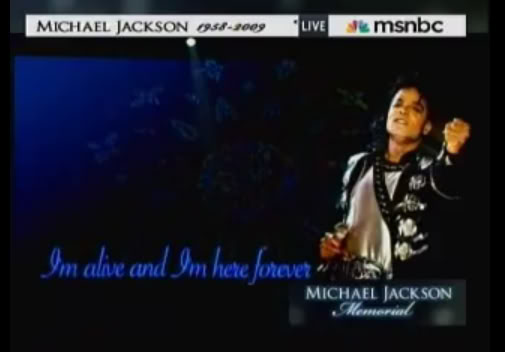 As you can see, Michaels friendship with Paul is quit a significance.

But hey, what are friends for, right?

Ok here's my question! Did he make a comeback?

"Paul's stand-in was a man named William Campbell, who had won a Paul McCartney lookalike contest. With a little plastic surgery"

This quote reminds me of Earnest Valentino, he went for a plastic surgery too, didn't he?

yeah! is the paul mc cartney the real one we've been looking at?